Koko started about seven years ago, while I was a graduate student at MIT. When I first got to MIT, I was completely out of my element. I had a background in psychology and social science, but I had never taken an engineering course and I’d never written any code. But I had a burning passion to build things. And I was convinced that technology, if designed well, could be used to help people flourish. I suppose that passion came across in my application and I was somehow accepted into a master’s program (despite my utter lack of qualifications).

Unlike me, my classmates were all technical wizards. They were the type of people who could read binary code and build entire computers from scratch. I tried to catch up, but I couldn’t. I dropped most of my classes my first semester because I had no idea what anyone was talking about. I went to a few undergraduate courses, just to get some foundations in place, but, embarrassingly, these were also way over my head.

“Koko started as a side project at MIT when I was a graduate student. I hacked together a platform to manage my own mental health, never thinking it would be of use to anyone else. But it helped me. A lot. And I wanted to bring it to the world... 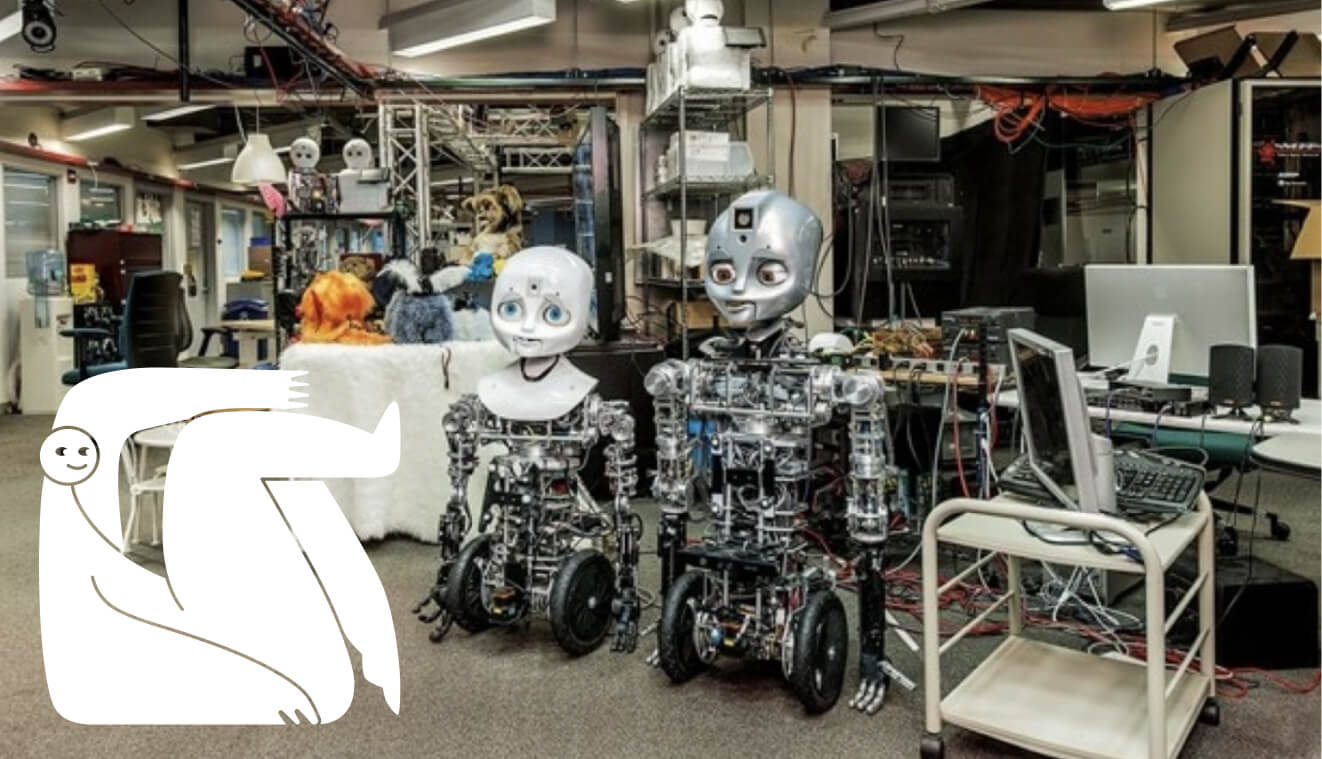 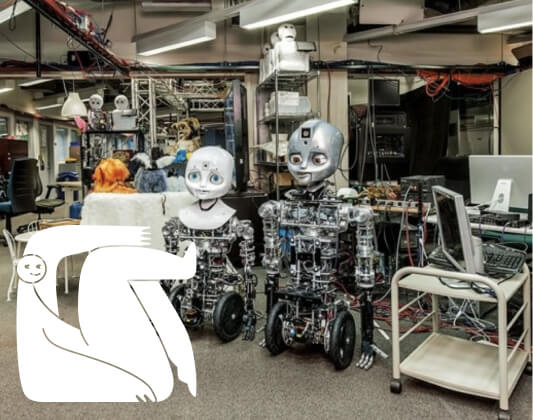 My office was to the left of this picture. Robots would occasionally bump into my door while I was working.

I spent much of my first year convinced I was stupid and an idiot, with no business being at MIT. The depression that’s stalked me all my life came back with a vengeance during those years. Winston Churchill called his depression “the black dog” and I suppose I’ve had a similar beast plodding alongside me my whole life. But MIT made things so much worse.

At the same time, I developed debilitating migraines. These lasted for many hours, even days. All I could do was lie down in a dark room with an ice pack over my face. I lived in a world of chronic pain and dysphoria and eventually I had to take a leave of absence from MIT.

After a while, I found some meds that seemed to help and I came back to school. I resumed my studies and I practiced coding on my own, late into the night. I finally made some headway, thanks in large part to one website: Stack Overflow.

One of my officemates at MIT, probably working on something insanely complicated. 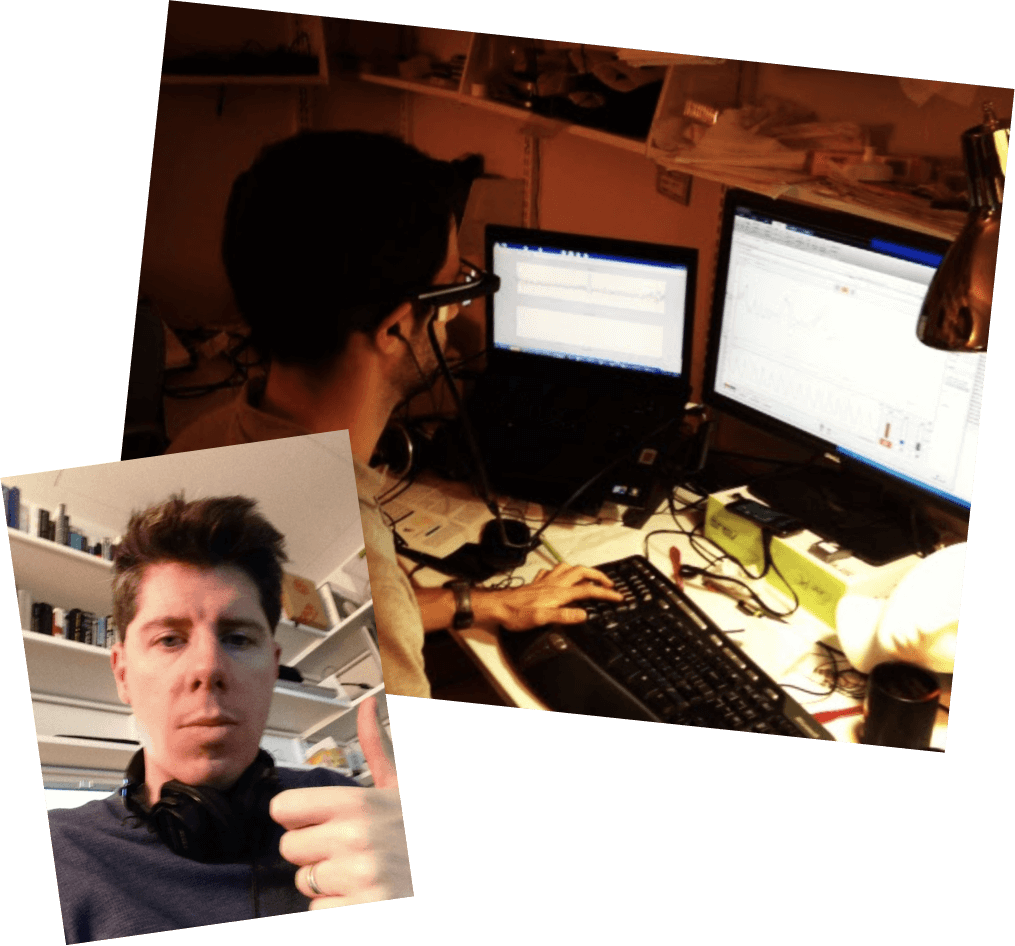 Thumbs up! I made it back to MIT, ready to finish my degree.

First manic sketch of Koko. Not particularly promising at first...

Stack is a place where you can describe any bug you’re having in your code, anything at all, and people will immediately come to your aid and offer incredibly elegant solutions — for free. I became obsessed with it. Who were these people who so generously donated their time and talent? Why were they participating? Who (or what) moderated everything? How did it work?

I started to wonder if a similar framework could be used to support mental health. I wondered if I could “crowdsource” therapy. If Stack could help me fix bugs in my code, perhaps something similar could help me address the bugs in my brain, so to speak. So, like any good MIT student, I quickly hacked something together and I tried it for myself. To start, I used Amazon’s Mechanical Turk service and I paid random strangers a few cents to read my negative thoughts and reframe them for me. Many of the responses I got were terrible at first, but some were profound and really changed my view of myself and the world. It’s amazing how impactful a short message can be.

After building a few prototypes, I added a small feature, almost as an afterthought. I made it possible for people using the platform to give help as well as to get it. I didn’t expect people would actually help others for free, but I figured I might as well find out. My advisor (Rosalind Picard) encouraged me to lean into this feature and give it prominence in the app.

For my PhD, I conducted a randomized-controlled trial on the platform that would ultimately become Koko. The clinical outcomes were great, but the qualitative feedback was extraordinary. Almost universally, people said that what helped them the most wasn’t the responses they received, it was the responses they gave. They found help by helping others. A team from Columbia University looked more closely at the data and they saw that, yes, people who helped others the most got the most benefits from the platform (especially in terms of reducing depression symptoms).

Emboldened by these results, I met up with two seasoned entrepreneurs (Kareem Kouddous and Fraser Kelton) and we spun Koko out into a startup. We chose the name “Koko”, because it seemed to bring forth positive associations (like hot cocoa or “Koko” the gorilla), without being overly bright-sided (like “Happify” or something). If you look at our logo, you can see the letters “ok” are highlighted and connected by a ligature. We aren’t trying to make people maniacally happy, we are simply trying to give people hope and make them feel “ok.”

Koko was featured in several scientific and popular press books on mental health and empathy.

We raised some money, got some press, and before we knew it, we had about 50,000 people on an invite-only waitlist. We started small, with only a few thousand members on the app. It was a wonderful community and everyone was passionate about the mission and what we were building. Everyone was addicted to helping others on the app.

After a year or so, we started to experiment with artificial intelligence and we built a robot called Kokobot. It wasn’t particularly smart, but it could moderate every exchange on Koko, categorize things, and immediately let us know if anyone was in crisis. We partnered with many large social networks, such as Pinterest and Tumblr and Kik and pretty soon we had thousands of people using Kokobot a day. In a few years, we reached nearly two million people.

We were building an incredible service. It was featured in several books, podcasts, and documentary films. We published eight academic papers and some of the world’s most famous psychologists raved about us, including the founders of CBT and positive psychology. It was the highlight of my career and things were just getting started.

And then it stopped...

Here’s what happened…We were using Kokobot to help social networks identify people in emotional distress. This worked great and we helped a lot of people, but the social media companies weren’t paying us all that much. But they soon realized they could reuse our technology to address other problems — things like hate speech, fraud, etc. They paid a lot for this. And very quickly, our business shifted and Kokobot started to gather dust. The app got buggy and eventually it stopped working altogether. This was devastating to me personally, but it was horrible for our users as well. I was about ready to quit in frustration and then Airbnb became a client and offered to acquire us. We managed to keep the Koko name and some of its technology, but everything else (including the founders and early employees) moved over to Airbnb.

My time in industry was very difficult. I really missed helping people on Koko. Thousands of our users felt similarly and I would get messages nearly every week from people asking whether Koko would ever come back.

But now it's back!

My cofounder Kareem and I have been laboring to bring Koko back, this time as a nonprofit. We have spent much of this time paying for the service ourselves, but we’ve started to receive some meaningful donations. We are now joined by some wonderful teammates, including Rob Knowles (a former Koko user himself) and Diamond Wiley, one of our community managers and our administrator. And of course, we have many wonderful academic colleagues and clinical advisors from institutions like Stanford, Harvard, and MIT.
In many ways, the adventure is just beginning. If we can keep doing what we’re doing, there’s no reason we can’t help many hundreds of millions of people around the world. The reason for this is simple. Fundamentally, people love to help each other. And helping others makes us feel good. It can even make us well when we feel unwell. We just need to give people a little nudge. That’s what Koko brings to the world. And it’s up to all of us to get it out there.
‍

Koko’s mission is to make mental health accessible to everyone

All of our services are free. We take user privacy very seriously and we never sell data. We rely on donations to make our impact.